On June 12, 2010, a dedication ceremony was held at Central Florida Veterans Memorial Park for the unveiling of the monument, “Patriots of the American Revolution, 1775-1783, Heroes of Liberty.” 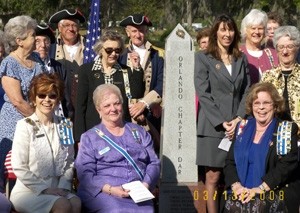 On March 13, 2008, the chapter honored the original thirteen chapter members with a grave site marker.  The beautiful site is located at Greenwood Cemetery in Orlando.  The marker is on the Historic Greenwood Cemetery evening tour every week.

March 30, 1924, the Orlando Chapter unveiled a granite tablet on the site of Fort Gatlin, a military outpost, two miles southeast of Orlando on Gatlin Avenue at the end of Osceola Avenue.  That fort was erected November 9, 1818 as one of a chain of forts extending from Sanford to Tampa.  Attending the ceremony was Martha Tyler (85 years old) who, when a little girl, was a refugee in this fort where she was protected from the Indians.  Text on the chapter marker photo reads:  “Erected by the Orlando Chapter D.A.R. Mar. 27 1924, Marking the site of Fort Gatlin, 1838 Military Outpost.”

On November 11, 1924, a flag pole and granite marker were placed on the grounds of Memorial High School to commemorate the soldiers of Orange County who fought in World War I.  Built with the aid of patriotic citizens of Orange County, the marker is now located on the east side of Lake Eola.

On March 15, 1935, a large granite rock with a bronze plaque and a roadside marker both marked the site of Fort Maitland, built in 1838, by Lt. Col. Alexander G. W. Fanning, on the military road connecting Fort Mellon of Sanford with Fort Gatlin of Orlando.  This fort was used as a stockade in the Seminole Indian Wars.  The fort was named for the Seminole War Hero, Captain William Seton Maitland, a native of New York and graduate of West Point, whom President Andrew Jackson commissioned Brevet Captain for gallantry and “good conduct” at Withlacoochee December 31, 1865.  A new marker was placed a few feet from the original location in 1972, to replace the original which was lost.

In 1935, a stone of Florida travertine was donated and dedicated by the Orlando Chapter in the “Walk of Fame” at Rollins College to honor Miss Lucy A. Cross, a precursor of the college, on its 50th Anniversary Celebration.  Miss Cross was a member of the Daytona DAR chapter.

On June 16, 1951 in Christmas, Florida (located twenty-two miles east of Orlando and fourteen miles west of Indian River City on Highway 50) a historical marker was placed to commemorate Fort Christmas.  This fort had been established in 1835 and was in a siege of war on Christmas Day.  The fort was destroyed by fire many years ago, hence all that is left of this historic site are live oaks and a growth of palmetto.

Visit the City of Orlando Historic Preservation Department to learn more about the history of “The City Beautiful.”

The content contained herein does not necessarily represent the position of the NSDAR. Hyperlinks to other sites are not the responsibility of the NSDAR, the state organizations, or individual DAR chapters.